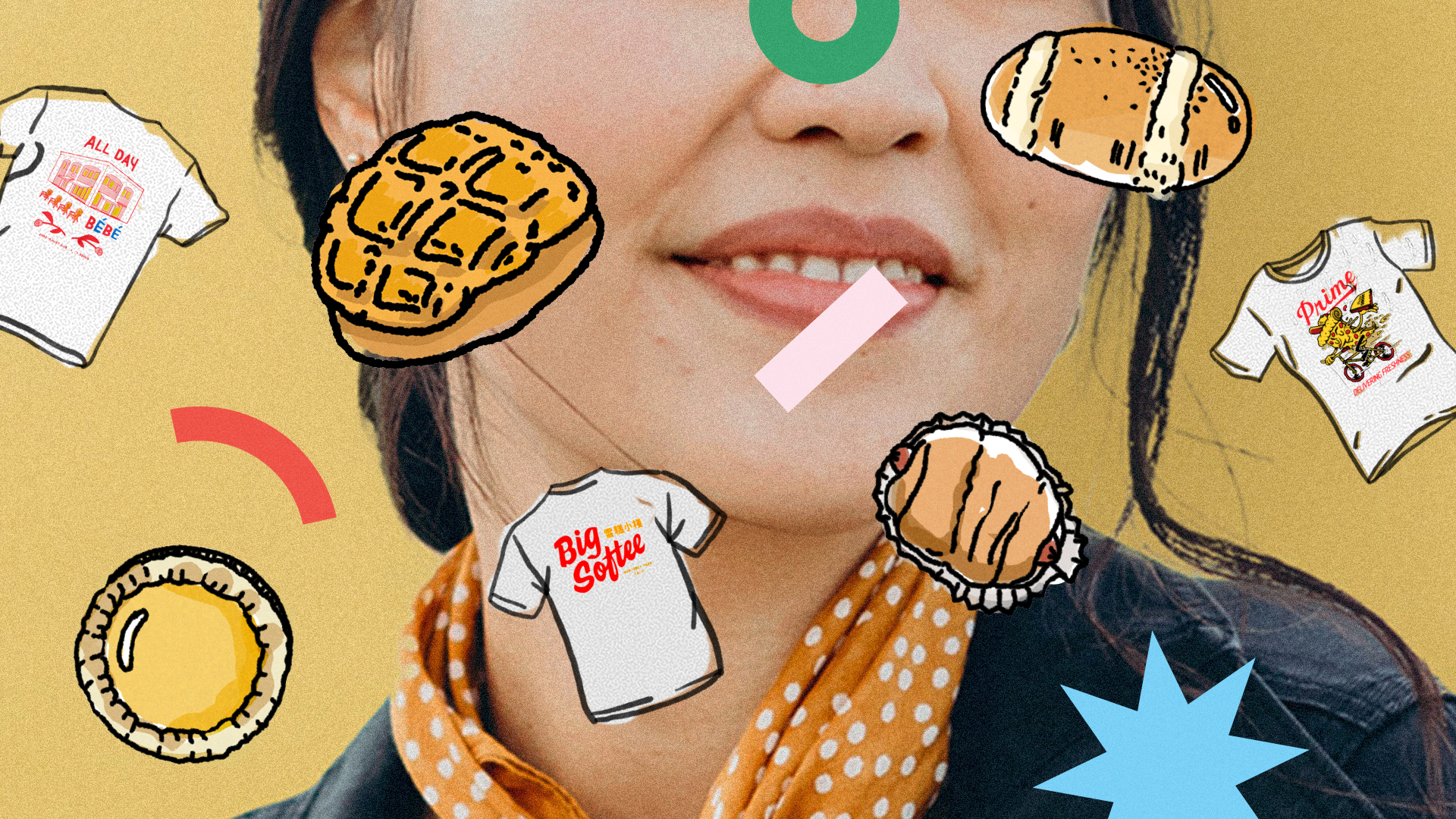 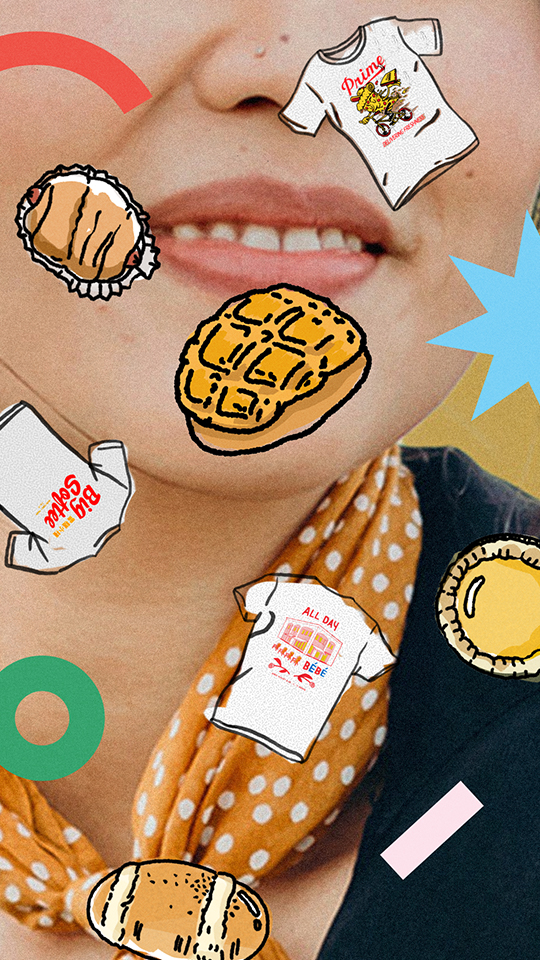 Presenting The Many’s first installation of Artboard 17575, a monthly column dedicated to the intricacies, nuances, beauty and limitless possibilities of design. It’s my pleasure to bring you the first exploration.

Over the past few years, the design world has trended towards nostalgia — a good recent example being Burger King. But the lockdown really seemed to accelerate this trend. And why wouldn’t it? For many, nostalgia is more than just a vintage look, it’s a return to a happy place plucked right from our memories. Something which was sorely needed after a whole year of “in these uncertain times” commercials and emails.

For me, many of my happiest memories revolved around food. I spent a large part of my pre-kindy years with my gonggong (grandpa). Our mornings almost always began with a sesame bagel from the local bakery followed by some laundry and then a midday walk to the traditional Chinese bakery where we picked out glorious baked goods from glass display cases. The afternoon would be dinner prepping of Shanghainese influenced Cantonese dishes. All these smells and textures bring me back to the cherished memories of time spent with my grandfather. 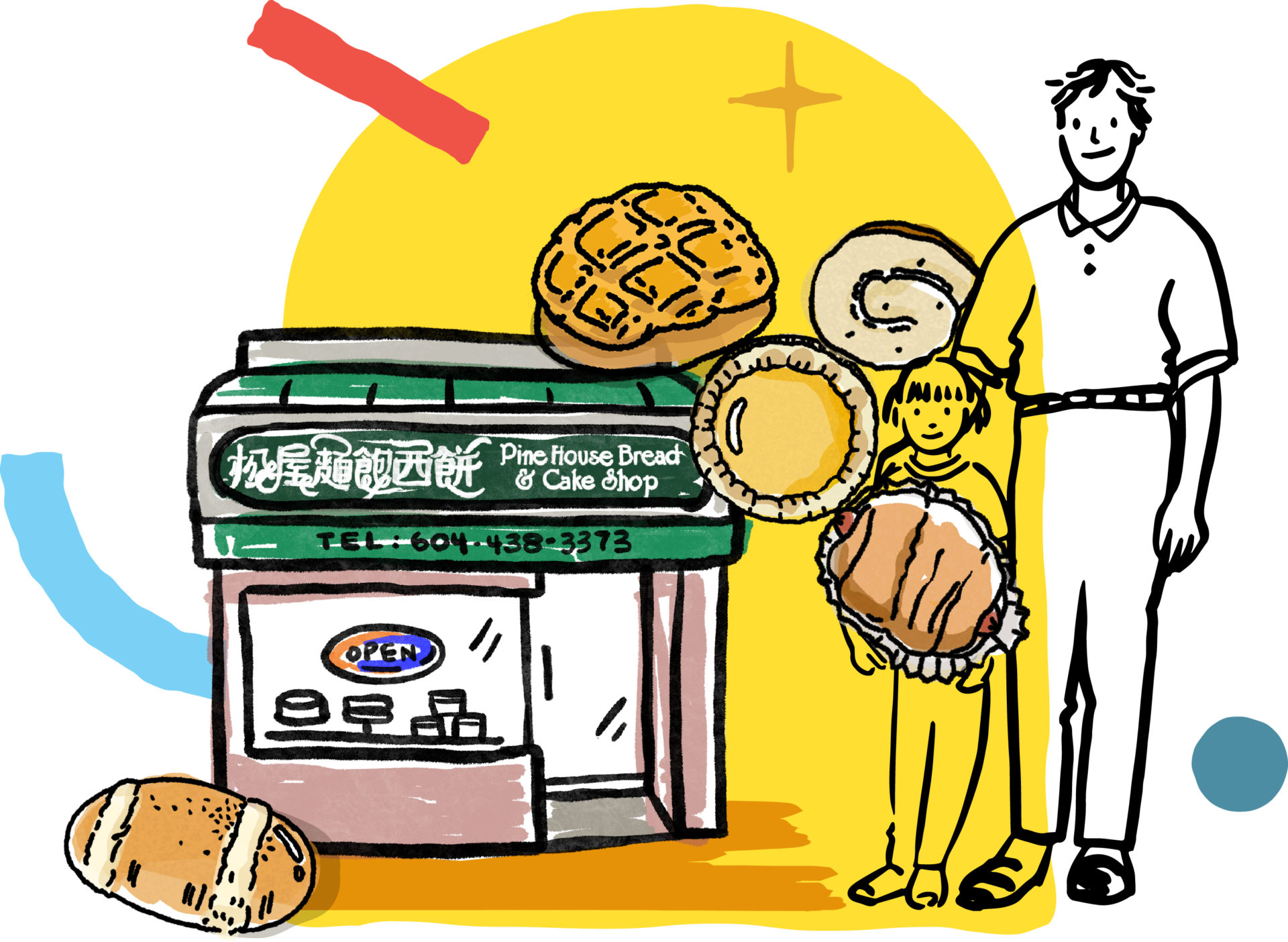 Food has always been personal for me, and recently I’ve seen my two loves of food and design starting to blend together. One thing I noticed during lockdown was that whilst restaurants were forced to operate at a limited capacity, they also started to sell branded merchandise to help offset costs. Design became part of the experience.

I’ll be honest, I’ve never been into graphic tees. They all just felt a little generic and unconsidered. They were mostly just logos slapped on the back with crusty ink on equally scratchy t-shirt blanks. However, these new tee shirts popping up felt unique and collectible. They were printed on soft blanks that hung nicely and something that I would actually reach for.

Most importantly, the designs were finally considered. The restaurants were working with artists and designers to craft mindful designs. What I’m seeing is a return of the human hand, rather than machine. I’m deeply drawn to the warmth, imperfection and off-beat personality. It’s personable and welcoming – like a big warm hug one would expect from their neighborhood restaurant.

Without concerts or live events to go to, this was the new form of poster collecting, but instead we can wear these shirts and proudly support the small restaurants in our community. Many restaurants don’t create large runs and if they run out they’re gone, so in a way you’re collecting limited edition works of art.

So what exactly is it that makes these graphics evoke a sense of nostalgia?

Practical color palette (printing with multiple colors can get pricey).

Bottom-heavy typefaces are traced back to the late 60’s/70’s design style  (jeanette/brandywine/funkford). 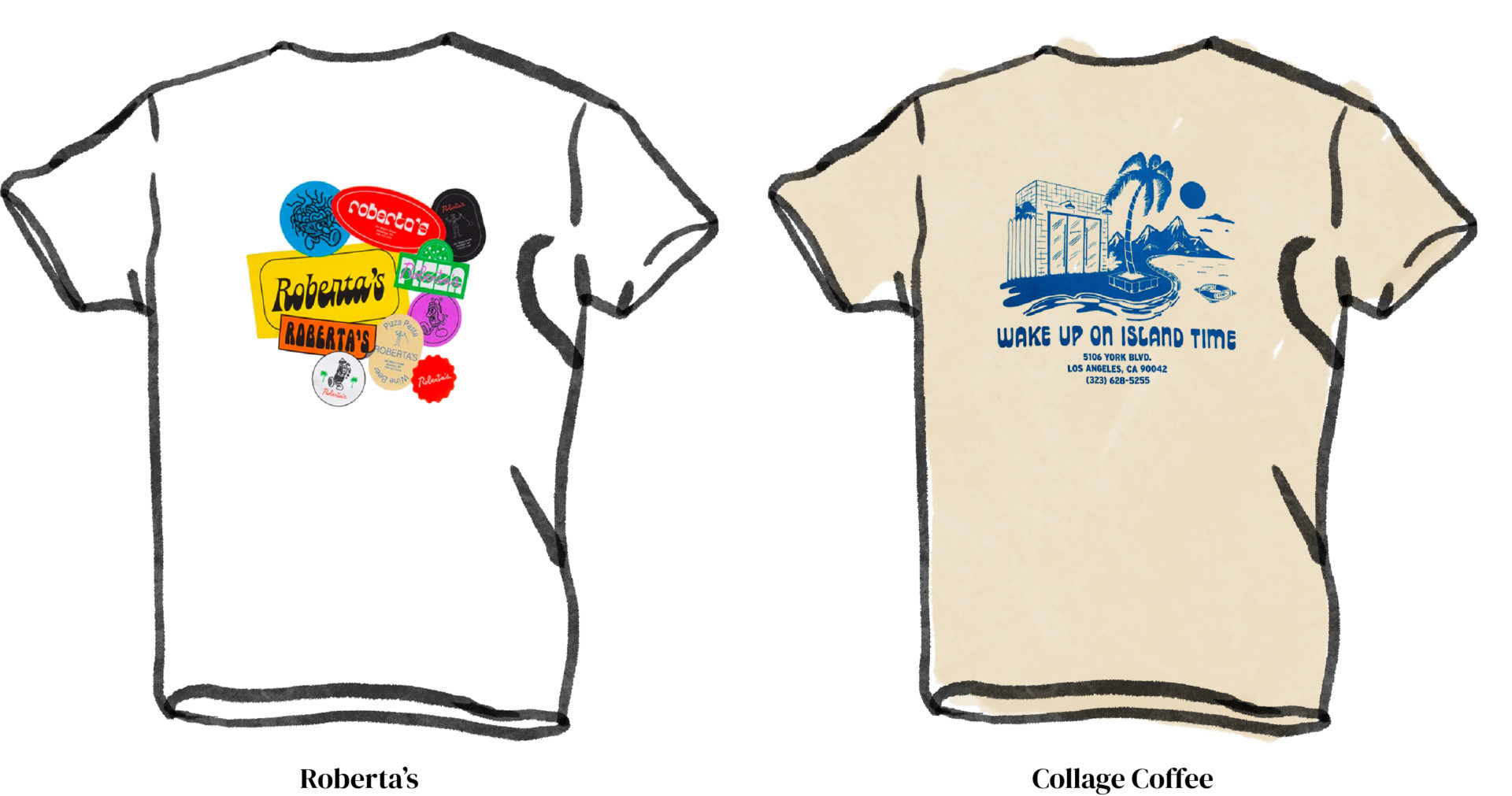 The use of typeface inspired by hand-painted signage lettering connotes a level of craftsmanship. 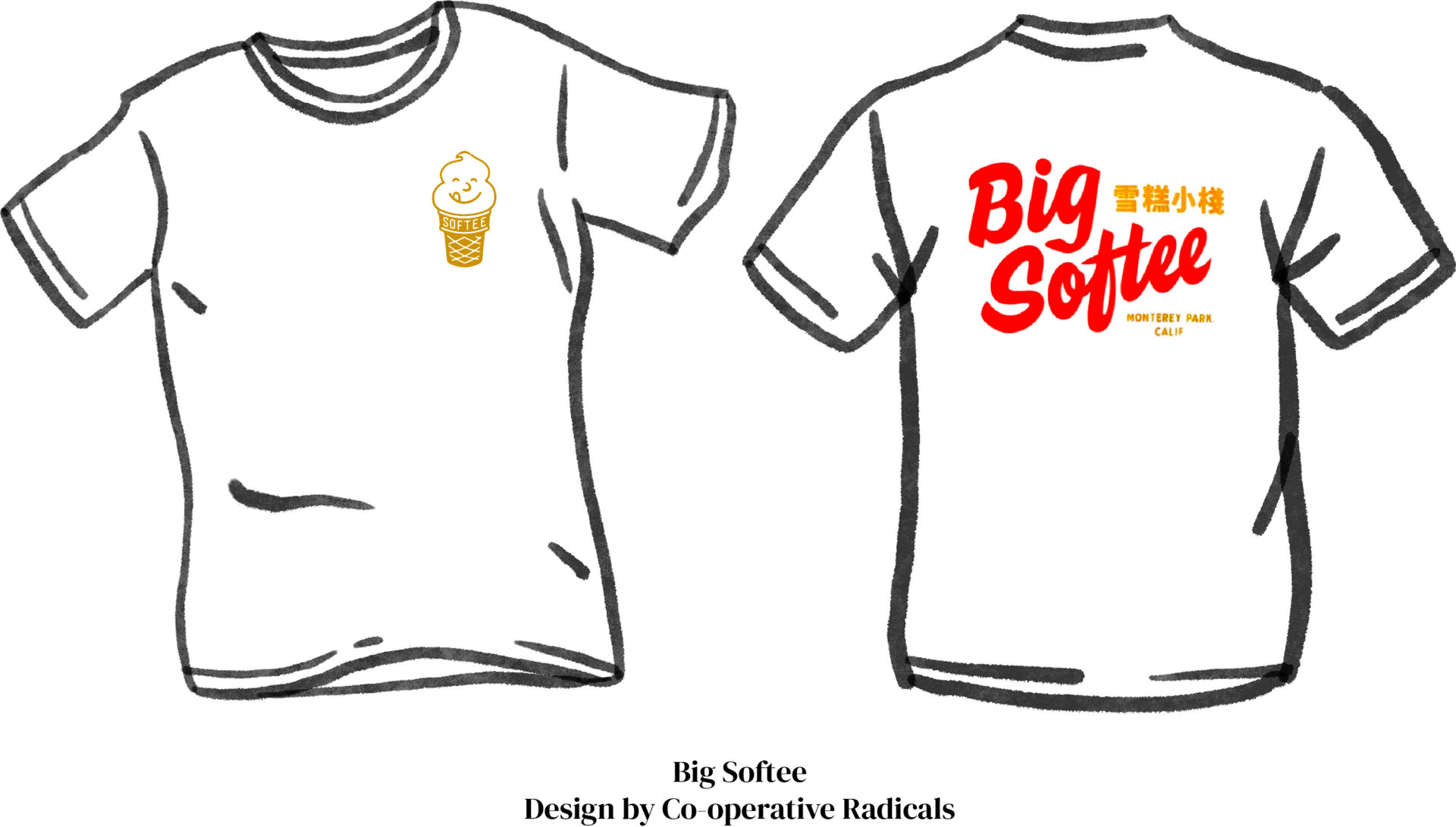 The inclusion of illustrations helps further define the persona and story that the establishment would like to tell.

My favorite part about these is that at the end of the day, it’s a happy place. Everytime I take out my Woon shirt, it’s going to remind me of the perfectly chewy noodles. I’m not going to hum and haw over whether a grid was used or if type was set according to “design rules”. It’s already perfect, like the baked goods I used to get with GongGong.

So with all that being said, I thought I’d take a stab at designing a t-shirt for the iconic restaurant that was once located at The Many’s headquarters on the Pacific Coast Highway, Thelma Todd’s Cafe.

Thelma Todd and her Cafe (which was also, at times, an underground casino), remained a southern California landmark and home to this silent film actress for many years. Some say Thelma still walks the halls of our office—and you guessed it, Artboard 17575 is a nod to our headquarters located at 17575 Pacific Coast Highway. Learn more about its history and Thelma’s mysterious death here.

I hope you’ve found some inspiration through this story.  And if you’re interested in designing your own t-shirt, utilize this toolkit that I put together to create some wearable memories: True grit texture supply, House Industry, Retro Supply Co, Procreate (or pencil + paper).

Amy Woo is the Associate Design Director at The Many.