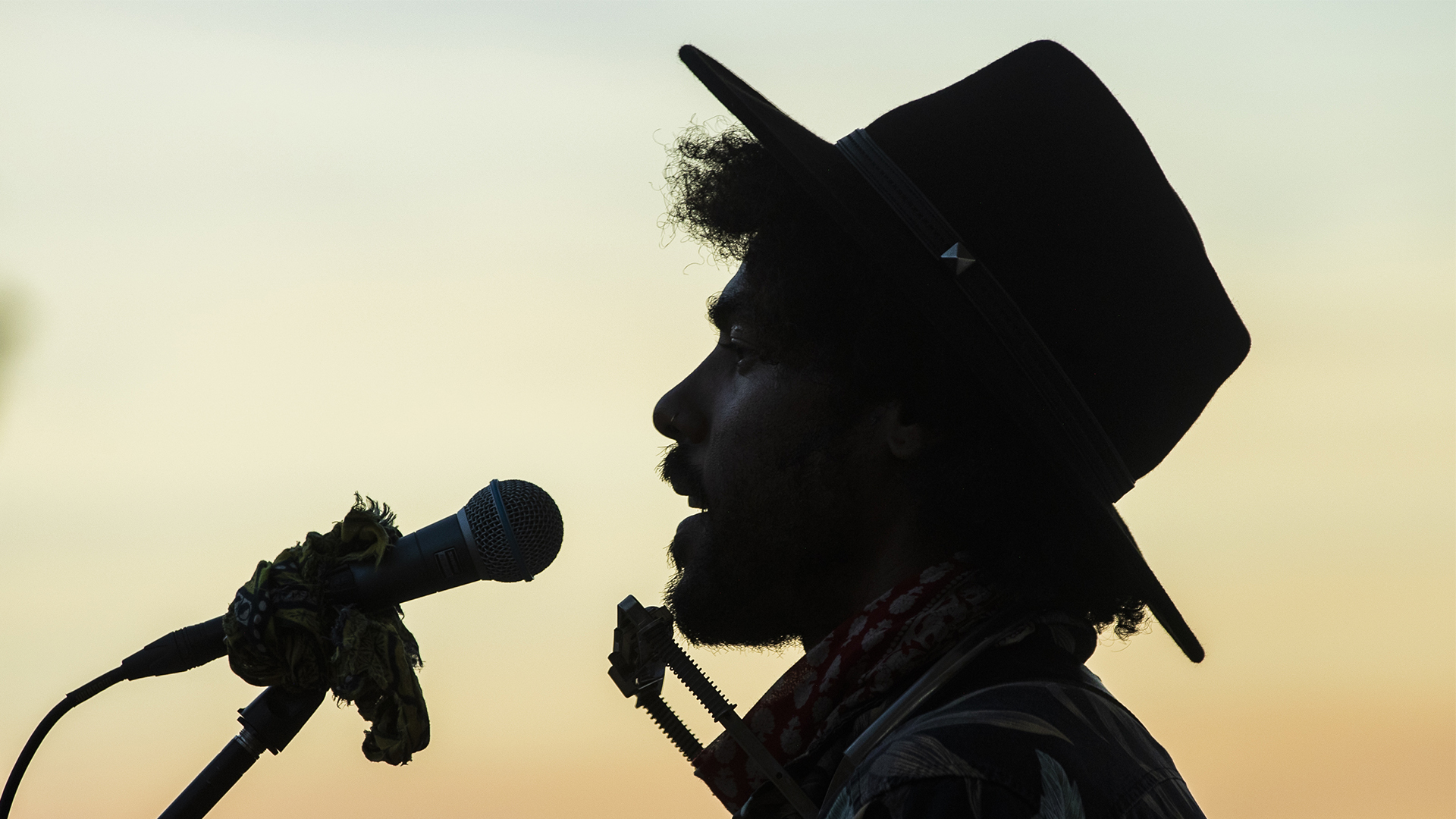 There is something about being part of an agency that feels like a family. You gain the opportunity to really know incredible people with profound stories and exceptional talents. To know them on a deeper, more human level, beyond the waving in the hallways (or on Zoom) kind of work friendships. I am humbled that, as part of our Voices of The Many program, I have the opportunity to dive into both the personal and professional lives of my colleagues.

Particularly humbling, is the opportunity to give you a glimpse into Zach Williams’ story. You see, Zach embodies a difficult history that is well-hidden underneath his relaxed smile and beach style, coupled with a mix of talents that go far beyond his role as a Senior Designer at The Many. On any given day, he’s putting his art into practice bringing brands to visual life, from reimagining the vis ID for Bumble Bee Seafoods’ consumer-facing brand to designing animated social posts for OutshineⓇ Fruit Bars, or strumming his harmonica through the streets of Santa Monica or ripping on his surfboard up and down the Pacific Ocean (or even in the middle of a desert; more on that later).

Most recently, as social unrest shook the U.S., Zach opened up to all of us at The Many about his childhood, growing up as an orphan in Alabama after his dad had passed away and his mom had left town, giving us all a perspective check. And since then, he’s gone on to release a quarantine-inspired single, “The Slow Down,” while soon after making a splash at Kelly Slater’s Surf Ranch, getting his stoke on and playing music for a Golden Road Brewery event meant to highlight a diverse group of surf, music and athlete influencers. So, I sat down with Zach to tell his tale and share his refreshing viewpoint and experiences with the world.

Amanda: Tell us a little bit about where you grew up and what your childhood was like.
Zach: I grew up in Birmingham, Alabama. Ever see that Will Smith movie, Pursuit of Happiness? It was kinda like that—living with my mom in cars and hotel rooms until I was scooped up by my grandparents around age seven, when I went from the inner city to the suburbs. I had a great time growing up with my grandparents until around high school when I had to move again, this time to the countryside to live in a boy’s home. So, my childhood was kind of all over the place. I wouldn’t change a thing though, it’s the reason I am where I am now.

AC: That sounds like a lot of transition for a kid. If there is one thing you could tell your teenage boy self, what would it be?
ZW: I’d tell him to keep doing his thing, that what you perceive as weakness is actually strength, and to never let anyone make you doubt yourself. 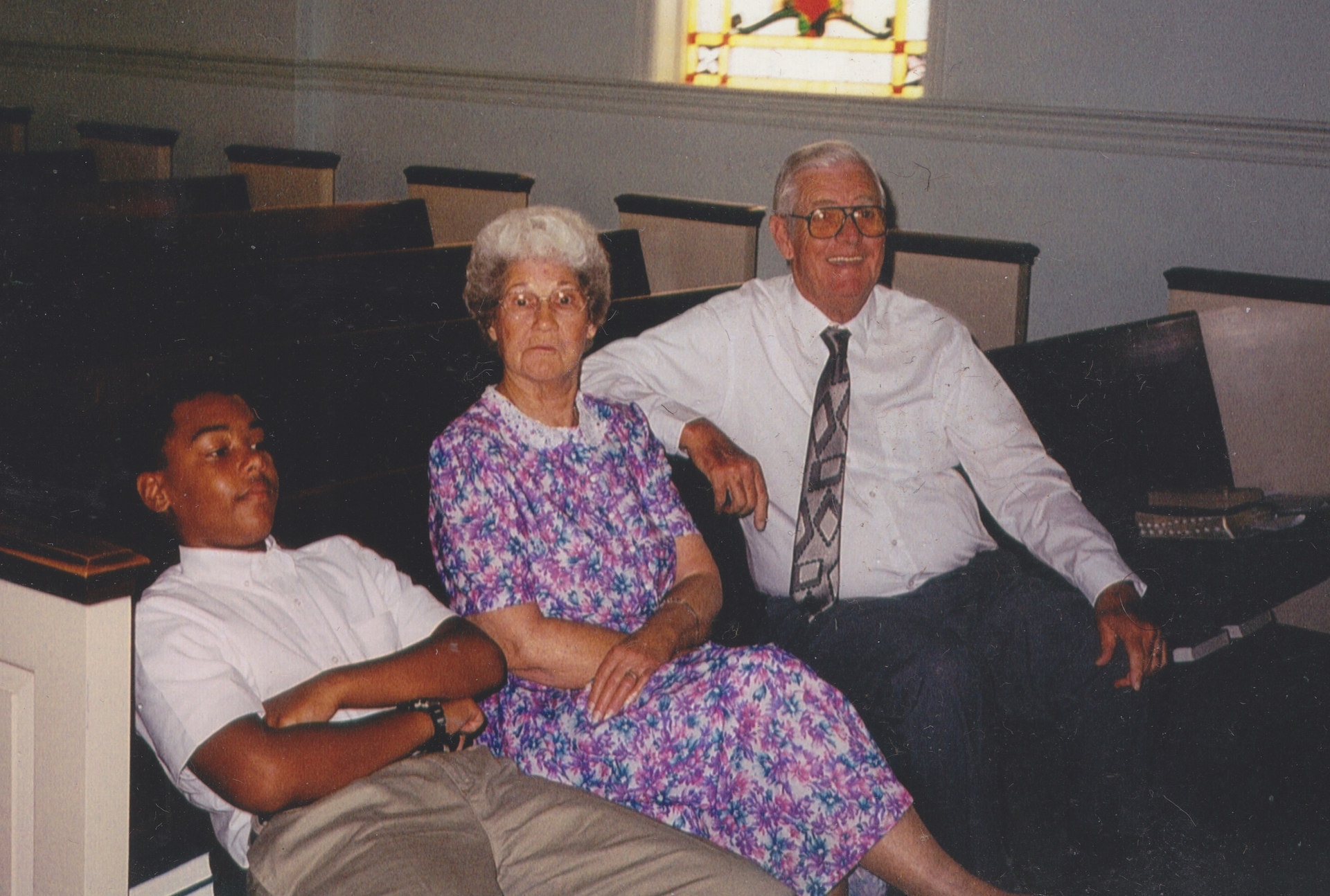 AC: I imagine it’s quite different, Birmingham, AL, and where you live now in Los Angeles. What’s your current experience with racism in the world-at-large and in the advertising industry? Is there any particular change you advocate for?
ZW: Yeah, being from the deep south, it was so clear to me once I moved to L.A. a decade ago how inherently racist my upbringing was. It was a stark contrast to how much more equal things felt here, especially on the westside of Los Angeles, where you’re judged more on what you can produce versus on stereotypes or racist constructs. In terms of change, I would love it if people could meet different kinds of people. In my experience, that’s all it takes to create some empathy and understanding from anyone.

Aside from being a designer, I know that you are also an avid surfer and dedicated musician. How did you first get involved with both and how do each of these creative outlets continue to inspire you?
ZW: I started playing guitar when I was 14. I had left my grandparents, moved into the boy’s home and had plenty of time to learn something new. I liked how I could do it all on my own and I liked how there was a whole system of music theory to discover.

And then surfing…I grew up loving the ocean and going with my grandparents every summer to the Gulf of Mexico; there are a few little waves over at Pensacola we would play around in. So when I moved to California, I jumped right in.

There is a concept of “the journey and discovery” when it comes to finding the right design expression, finding the perfect wave, finding the right melody to make the song work. I like the journey and discovery aspect of the creative process, and these three creative expressions—music, surfing and design—seem to fit me best. I am constantly inspired by jumping between disciplines, it keeps things interesting and they always seem to inform each other.

AC: Speaking of different disciplines, your new single, “The Slow Down,” puts a sweet and simple twist on the difficulties of quarantine and the pandemic. What inspired you to write and produce this song, and is there anything in particular you hope it elicits in your listeners?
ZW: It was a weird time earlier this year, a scary one. I wanted to soothe that fear in myself the best way I knew how and to try and flip it on its head and turn a negative into a positive. So I wrote “The Slow Down,” a song that talks about that, making the negative a positive. I hope that it helps inspire that sort of inner peace the way it helped me while I was writing it. I’ve used this strange year as an opportunity, and maybe this can encourage more folks to do that too.

AC: When you’re not designing and writing and playing music, you do a lot of traveling. How does this inform your work and your passions?
ZW: Traveling is everything. If you read any of the journals from the great artists, you always see that they’re on the road taking it all in. Any creator can tell you that they are most inspired when they are moving. New combinations of lights and smells and sounds. There’s something about physically moving that shakes the dust out of your brain and makes impossible things seem possible. When you’re out of your element you listen more and speak to people differently.

AC: Out of your element, great segue…you recently played a set at Kelly Slater’s Surf Ranch. First, can you share with readers what exactly that is for those who might not know?
ZW: The best way I can explain the Surf Ranch is to imagine that Tiger Woods built a golf course for himself and it was the most coveted golf course to go play on. Kelly Slater’s Surf Ranch is kind of like that, but for surfers. Kelly, alongside a team of scientists, built an artificial wave that surfs just like a real ocean wave, and it just so happens to be in the middle of the desert in Lemoore, CA. It has become a global mecca for surfing, and brands host days there where they invite pro athletes and musicians to perform. To be invited to play there, and to surf that wave, is a huge honor! 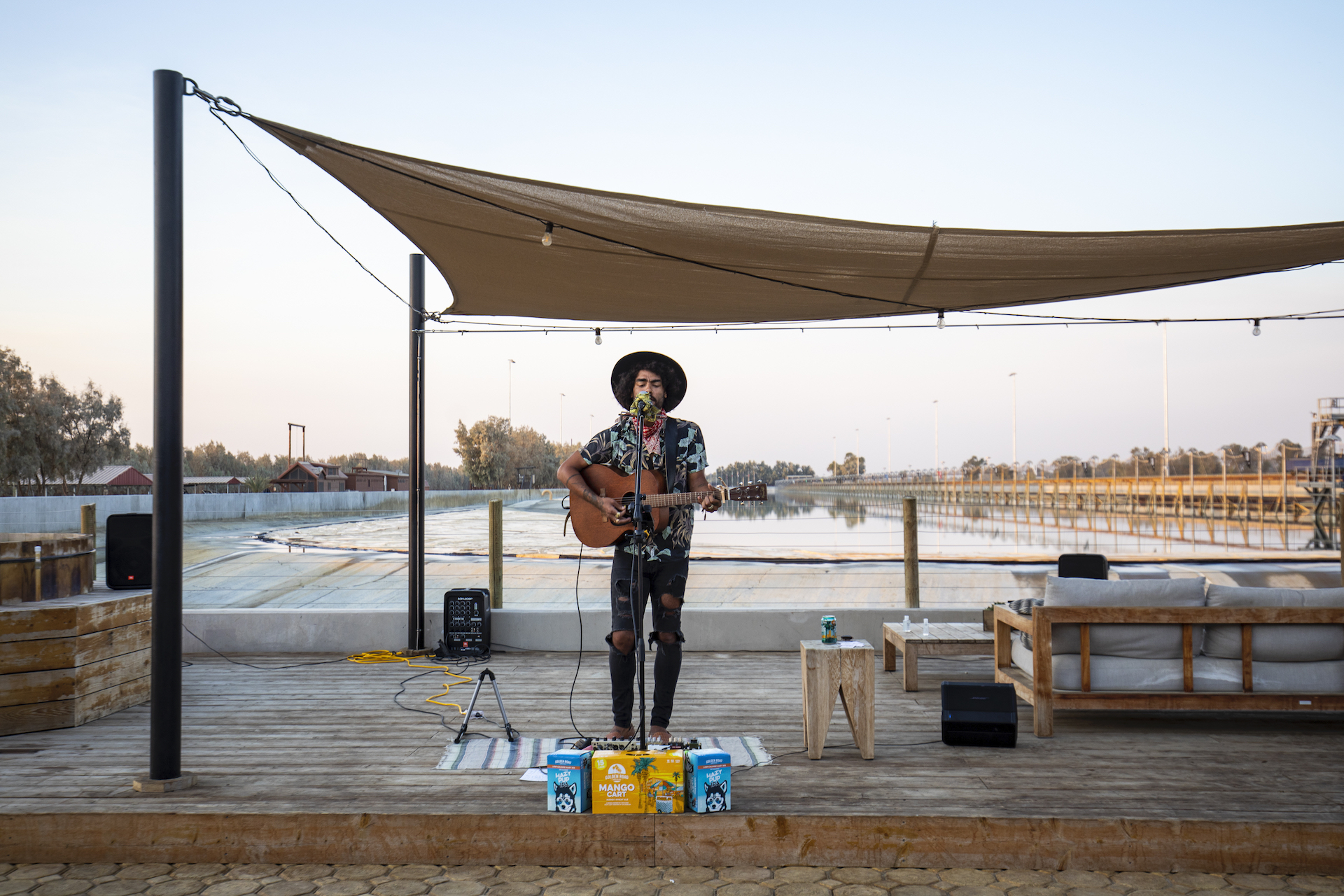 AC: I know that’s not an easy invitation to receive. How did you make the connection with Kelly’s team, and what does the kid from Alabama think of that musical experience and surfing alongside some of the best in the world?
ZW: Like my grandmother always said, you never know who you know. And that is the case here! I had met the director of marketing for Golden Road Brewery at some point in the past, and while they were pulling their day at the Surf Ranch together, I came up as the musical talent. And I think the biggest learning for me, something I understood from my childhood, is to always try and leave a good impression with folks, you just never know what that will lead to!

AC: Your grandma sounds like she was a wise woman! So, what is your favorite surf spot and why? Also, who is your favorite musician, if you had to choose just one!
ZW: My favorite surf spot is this sneaky little river mouth just north of Canggu in Bali, mostly because of the process of getting there from your villa—the barefoot motorbike ride, paying the temple gateman 20 balinese rupiah to park, walking up and down the sketchy black rocks. Love the journey.

My favorite songwriter is Lightning Hopkins, an original blues man who is my biggest musical inspiration. He taught me about the heartbeat of the blues and how to keep that beat in my writing.

AC: Last but definitely not least, what can you share with other kids like yourself, coming up in advertising, art or music, (or really anyone) about how to make it through the hard times? You’ve forged this crazy, beautiful path all on your own, what has helped you most in creating the life that you wanted?
ZW: Believe in yourself. I know that sounds super cliché, but that is 100% the reason that I am where I am. My grandparents always told me that I could do whatever I set my mind to, and I believed them and still do. Also, know that you can’t do it all on your own. Collective will is a real thing, so don’t be shy in making friends or helping other folks win. 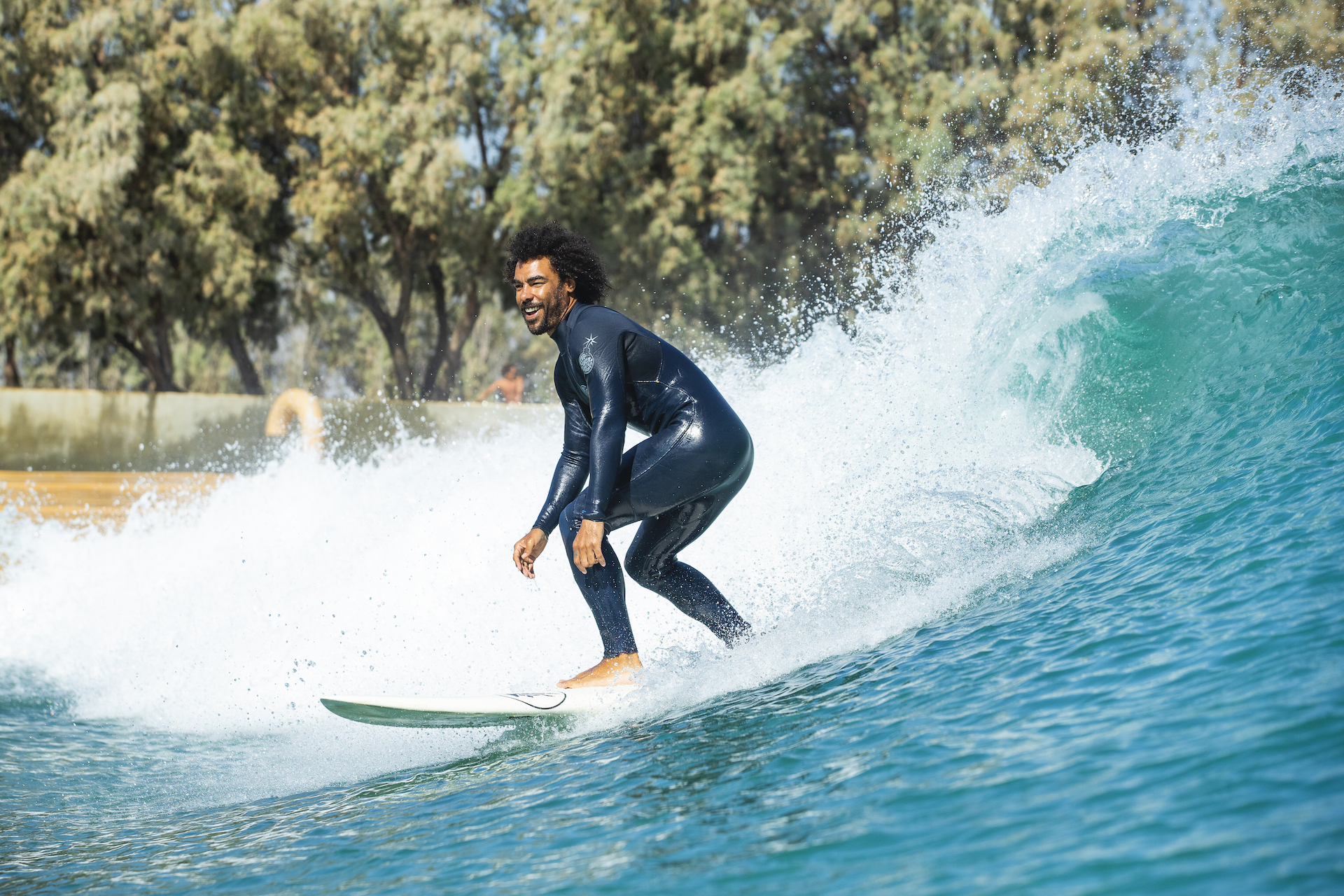 Zach Williams is Senior Designer at The Many, and Amanda Cosindas is Director of Marketing and Communications.