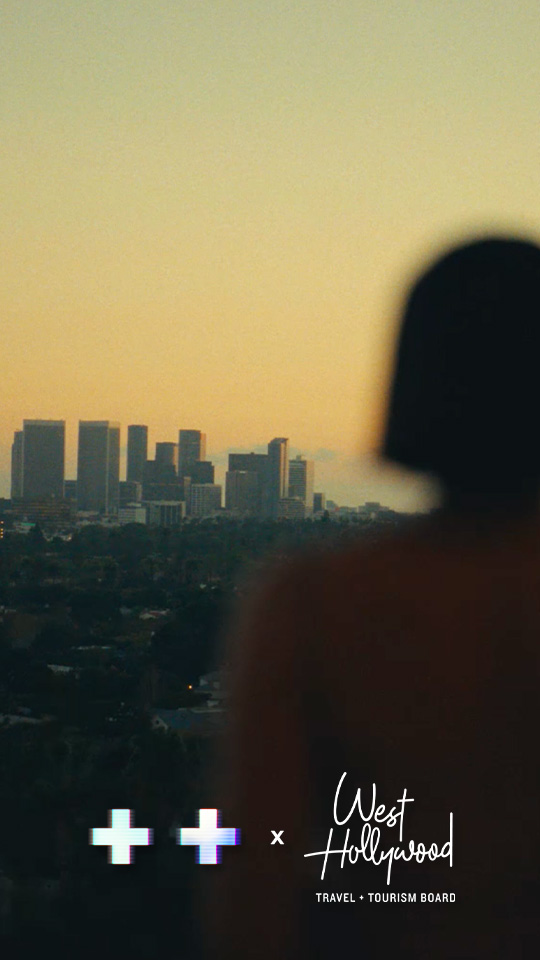 TThe West Hollywood Travel and Tourism Board, also known as Visit West Hollywood, today released a destination marketing campaign, “Creators of West Hollywood,” featuring notable personalities with connections to the internationally known city. The campaign features six successful and uncommon individuals, each representing the best of West Hollywood in dining, nightlife, design, music, fitness, and shopping. As tourism begins to flourish again in the city following the pandemic, the series is vital to furthering the board’s mission to re-establish the reputation the city’s always been known for: that of a vibrant, unique, energetic neighborhood continually at the forefront of progress and change.

The content series was developed in creative partnership with The Many, including creative directors Mars Milisic and Kate “Rizzo” Digilio, produced by its sister agency Plus Plus, and directed by newly signed Plus Plus director, Emmanuelle Pickett. The work was awarded to Plus Plus on the heels of its “LA Comeback” spot for long standing partner Los Angeles Tourism, the highest rated film to date for LAT.

“This campaign is an authentic and personal peek into why West Hollywood is the city that it is,” said Jeff Morris, Chief Marketing Officer for West Hollywood Travel + Tourism Board. “Each one of these creators has a real love and appreciation for the city, and this new video series will help our organization welcome the world back to the city at the heart of Los Angeles that has an unmistakable ‘vibe’.”

The campaign will also focus on exploring the “new Luxury” that has emerged in the city. As a counterpoint to traditional definitions of luxury, West Hollywood is looking to define luxury in a whole new way. Elevated experiences like exceptional hotels with unique, premium amenities and impeccable five-star service; award-winning (Michelin + James Beard) culinary; unique boutique shopping; cutting-edge wellness; and world-class entertainment are collectively inspiring and redefining what luxury truly is for visitors from around the globe.

Chef and Partner/Owner Raphael Francois (Tesse and Fanny’s), DJ and poet Mia Moretti, Founder and Owner Mary Ta (Minotti Los Angeles, MASS Beverly), General Manager Tommy Black of The Viper Room, Founder and Owner Kirk Myers of DOGPOUND, and Interior Designer and Co-Founder Adair Curtis of JSN Studio, all discuss their unique connection to West Hollywood in the video campaign. They highlight their experiences in the city, known for its diversity and inclusivity, and which has increasingly become known for its new luxury appeal. Each personality reveals their favorite spots, and why the city is important to them as it pertains to their respective fields and careers – which are all quite successful.

Filming was conducted over the course of three days on location in and around West Hollywood, including The West Hollywood EDITION, Tesse Restaurant, Fanny’s Restaurant at the Academy Museum of Motion Pictures, Boundary, DOGPOUND WeHo, Minotti Los Angeles Mass on Beverly, the Viper Room, the Sunset Marquis, Nightbird Studios and more. The series was shot on film by using both 35mm and 16mm lensed by cinematographer, Ian Rigby, and brought to life by West Hollywood-based director, Emmanuelle Pickett.

“Emmanuelle Pickett’s taste, aesthetic, and knowledge of West Hollywood culture made her the perfect Plus Plus director to bring this creative to life,” said Dave Horowitz, Executive Producer at Plus Plus. “As we define a new luxury, her expertise captures the neighborhood’s electricity in a flawless way.”

Pickett’s use of film was an intentional one, drawing viewers in with a feeling of intimacy to express the creativity of the city of West Hollywood. “The feeling and result of shooting on film resonates with the mystery and magic of West Hollywood – a place where truly anything can happen. Film is a medium that demands a type of care and presence from crew and talent that can often get lost in the age of digital screens and immediate gratification.” said Pickett. “This was a meaningful opportunity for me to give back to the city that I’ve come up in. I hope it feels like a love letter to my fellow creatives as much as it is to the city that has made my dreams a reality.”
Visit West Hollywood’s long-term vision is to market the city as a first-choice visitor destination to business and leisure travelers and create demand for the experience of West Hollywood. Visit West Hollywood is the only official organization dedicated to creating visitor awareness and demand, developing and delivering timely, relevant and comprehensive information about the destination. Watch the full series below or at  visitwesthollywood.com.